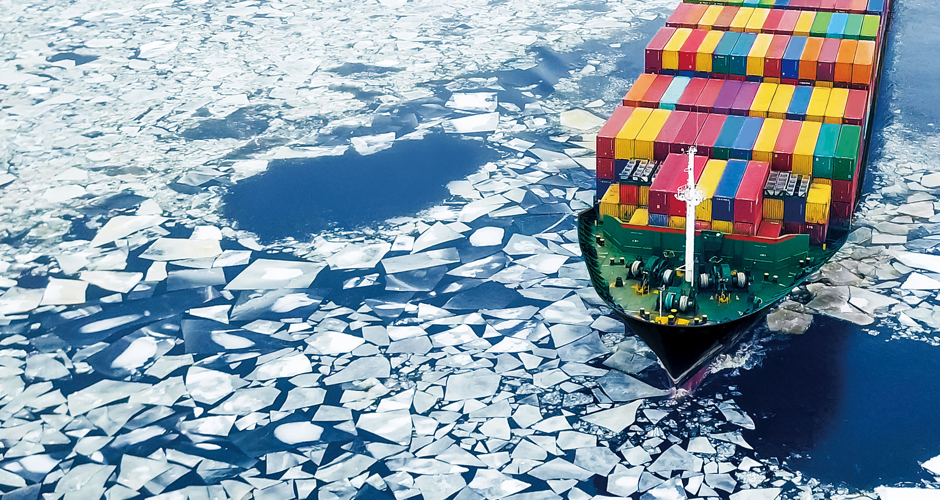 In early October 2018, the United-Nations (UN) Intergovernmental Panel on Climate Change (IPCC) released a landmark report warning there are only a dozen years to limit global warming before climate change becomes catastrophic.

It is a sobering report, and one that cites diminishing Arctic sea ice as a symptom of our warming world.

This diminishing ice is a terrible symptom for our environment, but for governments and shipping lines, there’s a silver lining – the resource-rich Arctic has never been this accessible. Diminishing Arctic sea ice and increased seasonal accessibility offers an abundance of natural resource opportunities and a fast track shipping lane for summer seaborne freight.

In August 2018, the first container ship through the Arctic, loaded with fish and electronics. The vessel’s journey was a one-off exploration that also collected scientific data on its historic adventure.

The Arctic isn’t just in the sights of the UN and environmentalists, it also offers strategic geopolitical interest for Russia and rising world power, China. In January 2018, China revealed its ambition to launch the Polar Silk Road.

Malte Humpert, a senior fellow at US-based think-tank Arctic Institute, agrees “The fact that shipping lines are willing to go in the area and explore around, definitely show there is nice economic opportunity for operators. It won’t replace the Suez Canal, it won’t replace the Strait of Malacca or the Panama Canal but there’s a niche opportunity for operators to decide, on an ad hoc basis, that certain voyages can go through the Arctic.”

What makes it worthy of exploration and what possibility does a future with Arctic shipping present?

This future offers two important elements, the first is facilitated by the reduction in the extent of summer ice. It’s likely the Arctic’s future consists of ice-free summers. This will reduce the complexity of sailing through the Arctic, although it will remain remote and isolated.

A summer polar route has commercial interest as an intermediate freight option. This freight product is a little faster than ocean shipping going through Suez Canal and Malacca Strait, but not that fast that it competes with airfreight.

The second element of interest in the Arctic’s future is the exploitation of its resources. While this is not directly interesting for container ships, it is relevant to the industry’s operators and owners who will have an interest in the oil and natural gas story unfolding in the region.

Humpert is an expert on the geopolitical scene unfolding of the Arctic. “Why is the Northern Sea route happening right now? For Russia, the Arctic is important – that’s where its future oil and gas resources are located.” Much of Russia’s oil and gas in other areas of the country are running out so the resource-rich Arctic is now a focus.

Humpert explains, “Already today, Russia produces about 20 percent of its GDP above the Arctic circle.” President Putin’s economy is reliant on oil and natural gas, so it’s only natural that Russia will investigate how to get access to these frozen assets.

The two opportunities intertwine as the relief of Arctic ice conditions allow resources to be more easily shipped out and traded with the rest of the world.

For Russia, the Northern sea route is the obvious choice for solving this challenge. “Twenty years ago this wouldn’t have been feasible. In the 80s and 90s this was the domain of nuclear-powered icebreakers, today we’ve lost about 40 percent of ice extent in the summer. What was previously frozen is now open,” shares Humpert. 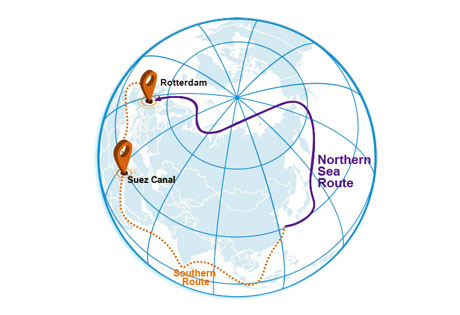 “The Northern sea route is and will be seeing a lot more volume in terms of shipping, most of that volume will come from commodities.” Russia will be exporting oil and natural gas that’s produced in the Arctic and bringing it to China, South Korea, Japan, or even Europe.

The shipping of resources may, eventually, beget a larger shipping market according to Humpert. “I compare it to the building of the railroad in the United States. Initially it was a very adventurous journey, but as more and more people did it, it became more mainstream. I believe that’s what we’ll be seeing in the Arctic, in addition to the oil, and natural gas, and coal we are going to see containerised shipping and even car carriers.”

China’s interest is also of geopolitical importance, Humpert highlights, “China is very reliant on the Straits of Malacca, about 70 percent of China’s import-exports and energy imports passes through the Straits of Malacca.” Recent activities shows the world that China is seeking more control over its key waterways.

While the Arctic won’t replace the Suez Canal, it does provide an alternative in case there is ever a blockage or a major war that makes the South China Sea unreliable.

In this case China could use the Arctic for energy imports and still have an export route to Europe.

Coupled with the political impact are the environmental concerns about the increase in Arctic activity. “It’s ironic that climate change, which is happening twice as quickly in the Arctic, actually allows humanity to pull even more oil and gas out of the ground, which will cost more emissions,” states Humpert. “Suddenly climate change allows for even more economic activity in the region. In terms of shipping, right now, there’s a push to ban the use of heavy fuel oil in the Arctic.”