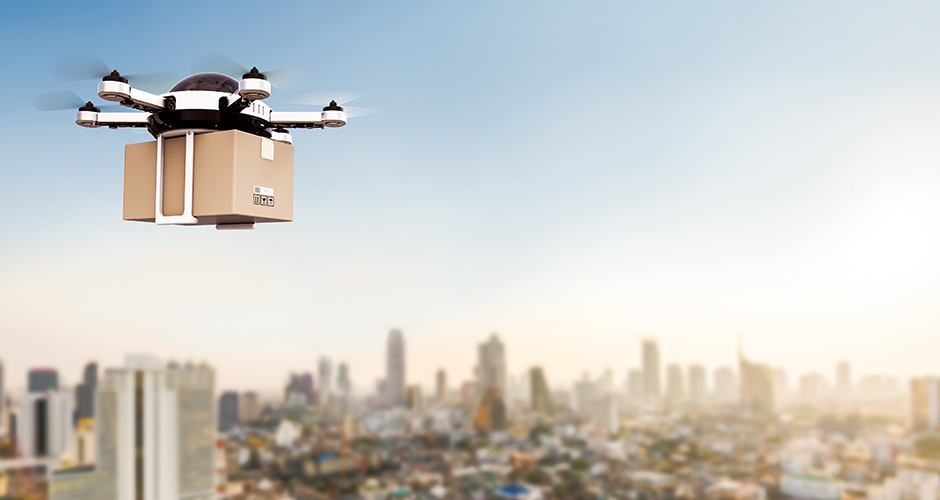 Drones and landing platforms of vans

THE FUTURE OF DISTRIBUTION

In an exciting view of the future of urban e-commerce distribution and deliveries, Mercedes-Benz Vans, US drone developer Matternet Inc. and Swiss online marketplace Siroop have launched a project called ‘Vans & Drones’ in Zurich to test an efficient van and drone based system for on-demand delivery of e-commerce goods.

The Zurich-based project will speed up and improve efficiency as the drones can land on the top of the vans at predetermined stations as the vans make deliveries. It cuts out the need to return to base to collect more parcels.

The next generation of trucks and vans will incorporate many new advanced features that will help to integrate package and freight deliveries in the air with road vehicles and distribution centres.

The project will see the use of beyond-line-of-sight drone operations using vans as landing platforms in major urban areas, to test a fully-automated e-commerce drone network.

The drones are loaded directly by the merchant then fly to one of two vans equipped with precision-landing technology.

The van stops at one of four pre-defined points, called ‘rendezvous points’, within Zurich. The van driver takes the product and delivers it to the customer, while the drone returns to the retailer. The entire logistics chain from order receipt to customer delivery will be timed against conventional delivery methods.

In another initiative, Mercedes-Benz Vans has launched a pilot study for an emission-free interconnected ‘Vision Van.’ This is an all-electric vehicle which combines innovative solutions for last-mile delivery, as part of the company’s adVANce initiative.

In a global first, the van will digitally connect all people and processes involved, from the distribution centre to the consignee. The company also claims a first for the vehicle’s fully automated cargo space and integrated delivery drones.

For example, if a parcel service provider stops his vehicle in a residential area, it will be possible to deliver multiple packages to nearby consignees autonomously by air – even if they are not at home – in addition to manual delivery.

This system is aimed at reducing delivery time and offers end customers new opportunities, such as same-day delivery at an agreed time. Mercedes-Benz Vans is forecasting that ‘Vision Van’ will boost efficiency by fifty percent on the last-mile deliveries.

The vehicle is equipped with a 75-kilowatt electric drive and has a travel distance range of up to 270 kilometres (km). With the Vision Van, deliveries are emission-free.
These solutions can make the transportation of goods and passengers even more efficient and open up new business opportunities and economic benefits for customers.

By 2030 two thirds of the world’s population will live in urban areas and there will be increasing demand for transportation solutions, that are faster, more efficient and environmentally friendly.

John Walker, a Lancaster, Pennsylvania based aerospace consultant who spent 32 years at the Federal Aviation Administration (FAA) before co-founding the Padina Group, Inc. in 2006. Walker believes early public acceptance of drone delivery networks in urban areas will revolve around hospitals. “Once drones can safely and reliably carry emergency medical supplies, it will pave the way to other kinds of drone deliveries. That linear network where drones can operate between hospitals would also have Amazon and anyone else that could meet the requirements to operate,” said Walker in an article published on the United States (US) National Public Radio (NPR) website.

In late 2016 Zipline, a San Francisco Bay Area-based robotics start-up, set up distribution centres in Rwanda, where its drones have made more than 1,400 flights carrying on-demand emergency medical supplies over 99,000 kms as of autumn 2017. This year the company will expand its medical delivery operations by launching a second base in Rwanda and new services to neighbouring Tanzania.

The Tanzania service will include blood pack as well as emergency vaccines, medicines and emergency supplies like sutures and IV tubes. They will be delivered by an all-new fleet of fixed-wing drones, or ‘zips’. These are hauling two kilograms of cargo and travelling 160 kilometres per round trip. According to Keller Rinaudo, Zipline’s CEO, delivery costs will be roughly on par with traditional transportation.

Such efforts face tougher hurdles in the US where aviation regulations are strict and limited for drones to fly into already congested national airspace. “We haven’t seen the FAA interested in a one-off approach,” said Susan Roberts, co-founder of AiRXOS, a General Electric subsidiary focused on drone infrastructure technologies.

Driverless trucks could be a feature on many roads in the next ten years, according to José Viegas, former secretary-general of the International Transport Forum (ITF) a think-tank linked to the Organisation for Economic Co-operation and Development (OECD).

In an article published in an FT Transport and Logistics Special Report, he said trials of automated trucks are underway on public roads in Europe and the US and that some governments are reviewing their laws and regulations.

The idea of a fully laden truck travelling at 100 kilometres per hour on a highway, with a computer controlling the vehicle, still causes concern in many quarters.

However, the latest technology is designed with safety at its core. This includes advanced features that can brake the truck automatically for objects, including pedestrians, as well as lane departure warning, fatigue detection and adaptive cruise control.

The next phase of development is to introduce technology that assists drivers and allows more efficient operations, optimising fuel consumption by controlling the speed of the vehicle. Work is also being carried out on technology that allows for ‘platooning’ whereby a number of trucks from the same company synchronise their braking on highways to drive closer together to reduce air resistance and improve fuel efficiency.

Drivers then take over when there is a junction and can separate the vehicles to enable each truck the transit individually. The technology will also enable the trucks to “communicate” with each other to synchronise speed and positioning to ‘platoon’ effectively. Sensors will also be fitted to trailers so they can detect other vehicles behind and operate the truck’s self-driving system.

The nascent technology is already in commercial use with companies such as Mercedes-Benz and Volvo leading the way. In Sweden, Volvo has a driverless truck operating in a mine in Kristineberg. It has also tested a driverless vehicle in China that drove between delivery hubs on public highways.

For Mercedes-Benz its technology assisted vehicles are already on the road, allowing hands-free operation by drivers. “Our trucks can automatically speed up or slow down depending upon traffic conditions and the driver is not required to brake or accelerate. These trucks can brake for hazards automatically and they can warn a driver if he or she has wandered out of the lane, while the automated transmission takes care of all the gear changes,” said Daniel Whitehead, Managing Director of Mercedes-Benz Trucks and Vans, Australia/New Zealand.

The trucks of the future will also have to meet increasingly tough environmental emissions standards, imposed by national and regional authorities worldwide in order to tackle pollution. The latest Euro 6 standard reduces particulate matters by 99 percent and nitrogen oxide levels by 97 percent.