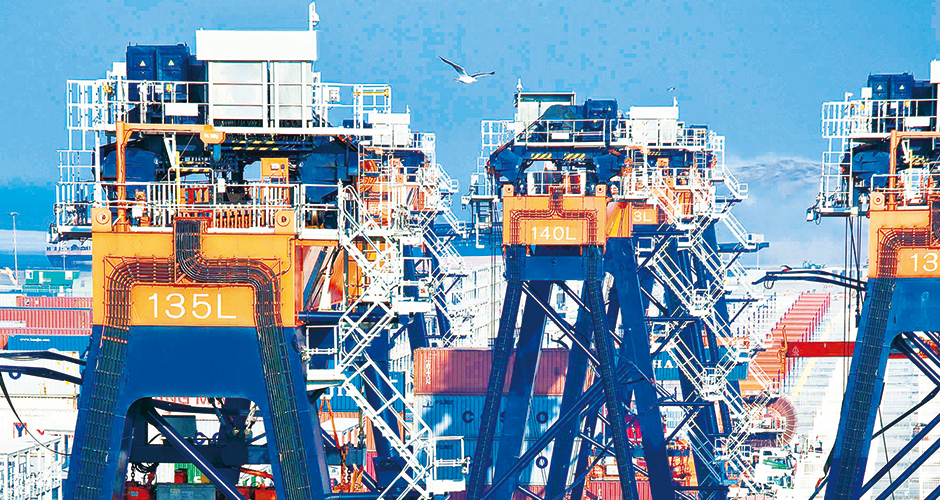 AIMING FOR ZERO EMISSIONS BY 2050

The Port of Rotterdam Authority aims to be a zero emissions port by 2050, and remains confident about achieving its goal of releasing “next to no emissions” by then.

Remco Neumann, Corporate Social Responsibility Manager at the Port of Rotterdam is focused on making the changes happen.

“It’s realistic to expect that industry and logistics will be virtually – or by that time, even entirely – zero emission and silent. We presently recognise that growth in the industrial era has had several undesirable side effects. In 2050, I believe there will be no more noise pollution or air pollution and no negative environmental impact. There’s a growing awareness that it is necessary, and indeed possible, to make this transition,” said Neumann.

However, he recognises that much still needs to be done. “Only six percent of our operations in the port and the Netherlands, as a whole, are powered by renewable energy. But this is set to increase exponentially.”

Neumann is confident that the twin drivers of technology and the societal shift to make sustainability the norm will satisfy growing demand for clean energy.

“This sustainable society is going to happen anyway, so you had better become an active part of the transition. Which is exactly what we’re doing as the Port of Rotterdam. In the port, you can already find fully electrical container terminals and hybrid vessels, the re-use of residual heat and Carbon Dioxide (CO2) and a rapid increase in the use of solar power. The port area already accommodates 1.6 megawatts of generating capacity. This is expected to increase ten-fold before the end of 2020.”

The port operates a sustainability programme and integral to this is ongoing dialogue with companies based in the port. A recent project was an incentive scheme for ‘Clean Inland shipping and sustainable logistics in Rotterdam’. This offers financial support to new projects that result in reductions in fuel consumption, greenhouse gases and air emissions by inland shipping.

Rotterdam, along with Amsterdam and Antwerp, is to host the first fully electric emission free barge, a Port-Liner vessel, and which will operate between De Kempen intermodal terminal in South Netherlands and Antwerp, as reported by The Loadstar.

The Port of Rotterdam also recently signed a development agreement for the initial investments in an advanced waste-to-chemistry plant in Rotterdam. Other companies in the consortium include Air Liquide, AkzoNobel Speciality Chemicals, and Enerkem. The aim is to convert plastic and mixed waste into new raw materials for industry. A reduction of CO2 emissions (by about 300,000 tonnes) is a main goal of the project.

The Mayor of Rotterdam City Council recently said that fossil fuel cargo types will be phased out. They will be replaced by sustainable energy and new markets, as reported in Port Strategy.

Other green initiatives include a discount of up to 20 percent on port duties for sea-going vessels that comply with standards above the statutory requirement. The Port Authority is also collaborating with other interested parties to construct a pipeline as part of its carbon capture and storage intentions.

Leo Ruijs, CEO of Hutchison Ports ECT Rotterdam, strongly backs the Port Authority in this sustainable vision, but admits many challenges lay ahead. For the port to achieve these reductions, carbon capture technology must prove effective. This is because the Port of Rotterdam focuses on zero emissions to the petrochemical industry and the energy sectors, both are huge in Rotterdam and primarily based on fossil energy resources.

“For the whole port it depends on many aspects, whereby an important element will be the reduction of CO2 emissions by storing it underground,” Ruijs said.

He thinks the Port of Rotterdam’s earlier target of a 49 percent reduction of emissions by 2030 (compared to 1990) is feasible. This aim is part of the objectives of the Paris Climate Agreement.

“It is achievable in the container sector, but challenges the industrial sector. It really asks for a different mindset. However, the Managing Director of Havenbedrijf Rotterdam NV (Rotterdam Port Authorities) is determined to set the scene in achieving this ambitious goal,” he added.

Other ports around the world have adopted emissions reduction strategies, such as the Ports of Los Angeles and Long Beach. However, ambitious targets of achieving zero emissions by 2030 have drawn some criticism from the President of Pacific Merchant Shipping Association, John McLaurin (as reported by Port Strategy).

McLaurin warned that stringent environmental regulations could draw shipping trade away from West Coast ports. He called for a more holistic approach to environmental management. McLaurin cited funding shortages, a lengthy permitting process and technical deficiencies as major obstacles to progress. He also believes the compliance timescale is unrealistic and that fines could be imposed on ports for situations over which they exert little control, such as customer emissions.

The Port of Rotterdam has already achieved a high degree of sustainability, according to Ruijs. ECT Rotterdam has been recognised for achieving several milestones in reducing its carbon footprint. A Dutch public-private programme on “Lean & Green” has awarded ECT with a number of Lean & Green star awards for its greener logistics efforts. Award winners pledged to reduce their CO2 emissions by at least 20 percent over five years.

Ruijs said that, “Most equipment on our ECT Euromax terminal is powered by electricity instead of diesel. The terminal has achieved a number of milestones in reducing its carbon footprint.”

He added that ECT Rotterdam is continuously investing in more sustainable equipment plus reviewing other aspects of its operations.

“Our latest Automated Guided Vehicles (AGVs) are hybrid, most of our equipment, especially on the ECT Euromax terminal, is powered by electricity. In my opinion, we are one of the front runners in this respect in the Port of Rotterdam,” said Ruijs.

“You have to fit new technology in an existing operation, which is more difficult than a greenfield situation. Therefore we want “sustainable” investments to follow the pace of our regular investment plan to keep it economically viable,” explained Ruijs.

He believes it is an asset to be viewed as a ‘green’ terminal. “It makes commercial sense for Hutchison Ports when it can align its investments with this goal in mind,” said Ruijs.

He concluded, “There is still a lot of inefficiency in the supply chain, especially in hinterland transportation. Reducing inefficiency helps to control emissions. The transportation services of ECT Rotterdam, under the brand of European Gateway Services and its extended gates, will not only help us to achieve the required emission reduction, but could still support the whole logistics chain better than today with more efficient transport over water and rail instead of by road.”