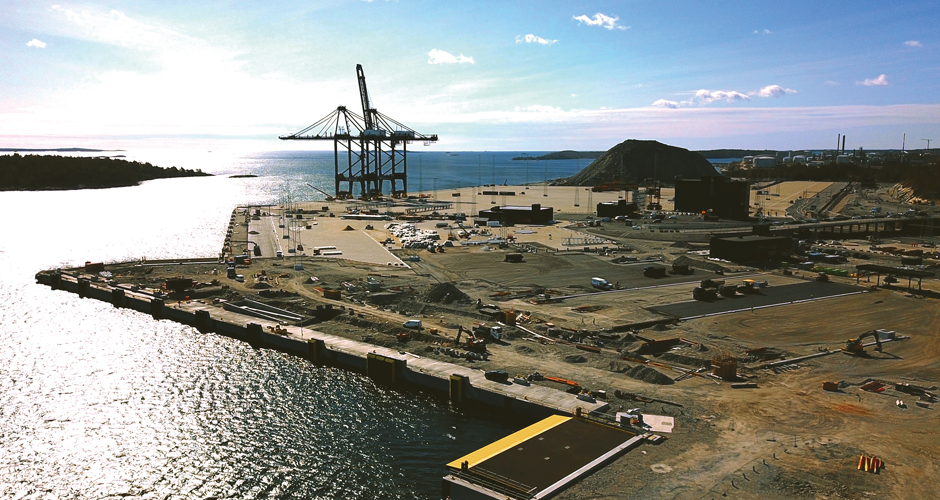 Preparations for the opening of Hutchison Ports Stockholm are currently in full swing in Norvik, some 60 kilometres south of Stockholm, the terminal’s infrastructure and facilities are quickly being finalised. The quay wall, container stack, office building and on-site rail track are practically ready for use. At the same time, the equipment and IT systems for efficiently handling ships and the hinterland modalities train and truck are arriving and are rapidly being installed. In the run-up to the launch of the operation, these are currently being subjected to extensive testing.

In phase one, Hutchison Ports Stockholm will start out on a 450 metre quay with two quay cranes (QCs) with a reach of 22 containers wide. A virtual QC integration was held among Hutchison Ports Stockholm Operations and IT team and the crane manufacturer with great success. The team was able to perform normal and exceptional flows to identify potential design issues early to reduce on-site QC cycle time. In addition, eight automatic straddle carriers (Auto-SCs) capable of stacking three-high will be deployed for the transport of containers at the terminal.

After a manual start, operations at the new terminal will be substantially automated soon afterwards. The QCs supplied by the manufacturer can be remotely operated, while the new generation of intelligent straddle carriers allow for unmanned operations using automation.

The terminal is capable to handle all visiting trucks with minimal human intervention, from initial pre-notification to gate-in and gate-out. Truck drivers will use the Hutchison Ports ubi app (to learn more) to prepare and organise their terminal visits, while at the terminal, optical character recognition will play an important role for identifying drivers and controlling each visit.

There are more factors that make Hutchison Ports Stockholm a potential game changer for north European container logistics. Today, nearly half of Sweden’s gross national product is generated near downtown Stockholm, with container flows travel via the port of Gothenburg on the south-westerly coast of Sweden necessitating 500 kilometres of transport over land. Furthermore, the inbound and outbound cargo flows at the current Container Terminal Frihamnen is limited due to its draught and capacity limits.

The new Hutchison Ports Stockholm terminal at Norvik will efficiently serve Sweden’s capital and the surrounding regions directly by sea as its the only deepwater facility along the east coast of Sweden. With a depth along the quay of 16.5 metres, an ideal location on the coast and state-of-the art equipment and facilities, the new terminal is ideally equipped for changing these ingrained transport patterns. Vessels of any size will be able to moor at the new facility when operation commence. Pilotage from the fairway only takes fifteen minutes compare to four hours at the current terminal.

Hutchison Ports Stockholm will be ideal to serve as a major hub for container flows to and from the adjacent Baltic region at its new terminal location.

Last but not least, the launch of Hutchison Ports Stockholm will give an important boost to sustainability. Using more environmentally friendly diesel-hybrid equipment, for example, but also through the rail facilities that are available on-site with direct connection to the Swedish rail network. The current terminal will be decommissioned shortly after Hutchison Ports Stockholm has come on stream. This will help divert freight traffic away from the highly populated Stockholm’s city area.

At the same time, the municipality is given the widely desired opportunity to convert the old terminal area into an attractive residential area.

Lawrence Yam, CEO of Hutchison Ports Sweden said, “We are very eager to make Hutchison Ports Stockholm terminal a great success. With the deepest draught of all ports in Sweden, the new equipment and the latest technology, our customers will benefit from high productivity at an outstanding location. We are looking forward to develop and expand business opportunities with our customers.”