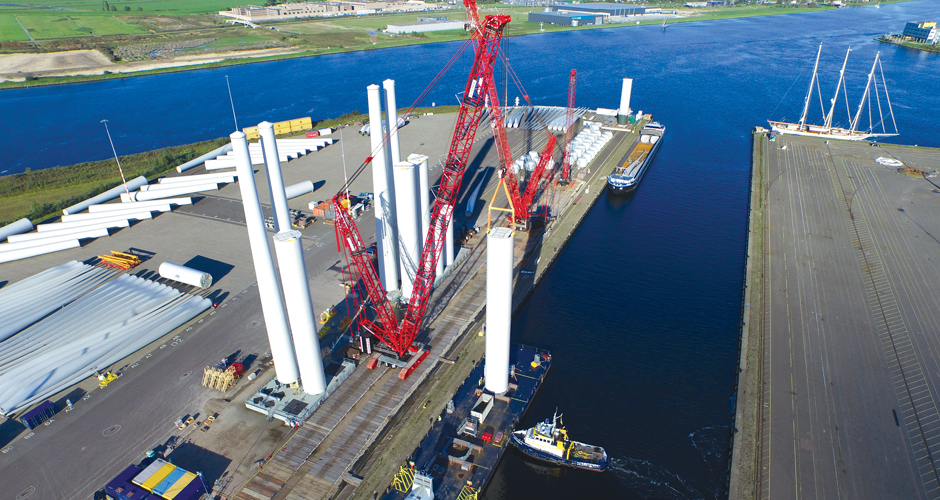 NO JOB IS TOO BIG

When you want to transport a power turbine or 100 ton gas pipe sections thousands of miles across international borders – who do you call? The answer is a project forwarder – a relatively small group of professionals who plan and execute multi-million-dollar projects from bridge building, transporting train locomotives to moving factories piece-by-piece.

Projects are high risk because forwarders quote a price on these projects, with best intentions, but many problems can be encountered along the way. Just a simple thing like a customs person making an error or an important document not being signed, can mean a ship standing at a berth for days, costing thousands of dollars a day, before being released.

“Nowadays the easiest way to define a project would be something that doesn’t fit in a container or on a pallet for an aircraft,” said Scott McArthur, Managing Director of Myriad Logistics. “Projects also means high profits as you need experts and experienced professionals to handle these heavy or oversized cargoes”, he added.

The difference between a freight forwarder and a project forwarder is that the latter works directly with shipowners to charter or part-charter vessels and have direct contact with the ship owners, the stevedores, port authorities and customs. Project managers will be on-site during the loading and unloading and for ocean cargo they would use breakbulk vessel types. For inland, project forwarders must also be prepared to build temporary bridges over rivers and ravines in more remote locations to transport mega cargoes.

On the airfreight side there is a large global freighter fleet available today for urgent project cargo moved by air. Vital large components for major engineering such as power plant machinery for infrastructure projects are typically the kind of cargo moved by airfreight. For very large pieces that don’t fit in a conventional freighter aircraft, the enormous Russian built Antonov An-124 can be deployed, with a maximum take-off weight of 40 ton and 226 ft in length.

SPEED IS OF THE ESSENCE

Project forwarding, like most industries, is more technology focused, and that is something that is being embraced with project forwarders hiring IT experts to help improve processes and make them better, faster and more precise. However, in project forwarding the hands-on experience of humans that have lived and breathed the handling of special cargo and project cargo is crucial.

In the automotive sector things must move fast, entire assembly lines are being shipped all over the world with the machinery and tooling equipment. It is a high stress situation and with the world being so small nowadays, China and Europe or China and US are just within 16-24 hours away by flight, projects are becoming more time definite, so, you need to know what you are doing.

“Having talent the ability to manage stressful situations, the knowledge and the contacts required to really handle mega projects properly are the most important attributes for a successful project forwarder,” said McArthur.

“I guess you can say project professionals are the high rollers of the forwarding world,” he concluded.

There are many multi-billion-dollar engineering projects underway around the world which involve excavating tunnels and bridge building. Then there are mines under construction in Central and South America and major land reclamation projects all over the world.

In West Africa, such as Angola, there are multiple major infrastructure projects underway to rebuilding roads and ports. In South East Asia, there are new airports, expansion of seaports, hospitals and housing projects. All are utilising project forwarding either locally or importing heavy or large materials, machinery and equipment.

The Belt and Road initiative (BRI) is the most exciting project involving potentially more than 100 countries with thousands of kilometres of new roads and rail systems. The project will take many years to complete, not only because of the sheer size of the project, but also all the politics, the lengthy decision making processes and the lead times from when a project is given the green light to completion can take three to four years.

“The project logistics market is fairly fragmented in nature, with the presence of large global players and small- and medium-sized local players. Most of the global logistics players have a special project cargo division to meet the market needs and demand. Additionally, local players are increasingly enhancing their capabilities, in terms of fleet size, service offerings, industries served and technology. Global manufacturers are making large and over-sized components in the factory sites (off-site), which creates huge complexities for the heavy cargo haulage companies. The global companies who have high capital and assets can invest in upgraded fleets and can benefit from the aforementioned scenario. On the other hand, regional and local players are also coming up with better industry solutions to support the needs of the clients in executing the projects in scheduled time,” according to a report by Mordor Intelligence ‘Project Logistics Market – Growth, Trends and Forecast (2020 – 2025).’ 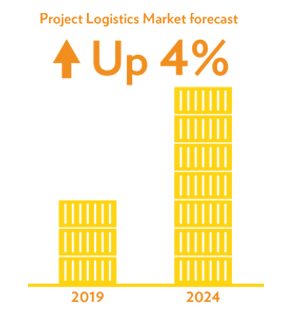 One of the fastest growing sectors in the project forwarding sector is renewable energy, particularly wind turbine power. In 2020, the European Union (EU) is aiming to achieve sourcing 20 per cent of all energy consumed in the bloc from sustainable means, that is expected to grow 12 per cent by 2030, according to a report on the Breakbulk Europe website.

Once 2030 is reached, EU estimates suggest an additional 320 gigawatt (GW) of wind power, both on and offshore, will be added to Europe’s energy mix. Germany will install the most, with 85 GW of wind, followed by France with 43 GW and the United Kingdom (UK) with 38 GW. Investment within the EU is growing and wind power is the major sector to receive investment.

The UK is at the forefront of European wind investment, in the first half of 2019 the country installed 931 megawatt (MW) of offshore capacity. It also has significant projects underway, for example the Hornsea-1, a 1.2 GW wind farm being built off the North-East coast, it will be the largest of its kind in the world once completed.

The UK’s University of Sussex suggests that Europe by itself has the power to meet the globe’s entire energy demands. A study revealed that, if Europe meets its potential onshore wind farm capacity, it could power 52.5 terawatt of power, according to the Breakbulk Europe report.

Transporting wind turbines including the generator, gearbox, drive train, and brake assembly particularly to offshore installations is challenging and require highly skilled professionals. Furthermore, to maximise the efficiency of wind turbines, the blades have been lengthened by more than 30 per cent to 50 metres during the last decade, creating another transportation challenge for project forwarders.

Editor’s Note: During the COVID-19 pandemic, many projects have been suspended, but will resume when the current crisis is over. Major infrastructure projects such as dam building and power generation are largely funded by investment banks and sovereign wealth funds. There may be delays in completing some of the projects as financing options are reviewed, post-coronavirus.