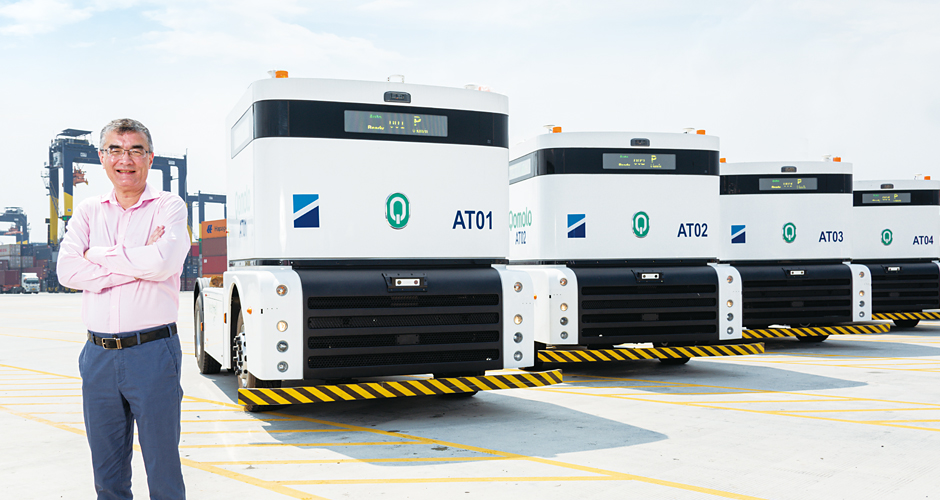 THE FUTURE IS NOW

As part of Hutchison Ports strategy to reduce its carbon footprint, improve sustainability and increase efficiency, the company has made a number of bold investments to advance its port operations around the world.

While many of the new solutions are not visible, such as investments in digital solutions, the new electric Qomolo trucks, also known as ‘Q-Trucks’, were delivered from the manufacturer in Shanghai, China in mid-April is currently on trial at Hutchison Ports Thailand (HPT) Terminal D, have provided a glimpse into the future.

HPT took the brave step to advance their port operations into a more efficient and sustainable future by testing cutting-edge technologies including the autonomous Q-Trucks.

In the past year, Terminal D pushed its sustainable port development plans to another level with the deployment of electrically powered remote-controlled ship-to-shore cranes and rubber-tyred yard cranes.

As part of the broader modernisation programme and to comply with the Group’s sustainable port development plans, HPT has also been rolling out measures to digitalise many of its processes including issuing invoices in electronic form while also introducing measurable procedures to help reduce paper usage and water consumption.

CREATED IN CHINA – TESTED IN THAILAND

The highlight of the automation plan is the testing of autonomous Q-Trucks, these vehicles which operate using cutting edge technology, are being put through their paces at Terminal D.

Stephen Ashworth (above), Managing Director of Thailand and South East Asia for Hutchison Ports spoke to OPPORTUNITY about the roll out of the project both at Laem Chabang and potentially at other ports in the global network.

“We brought in six Q-Trucks to Terminal D from a company specialised in *neuromorphic engineering called Westwell Lab in Shanghai. We’ve agreed with them to use these prototypes for a period of testing and integration,” said Ashworth. (*The neuromorphic chip can teach, train and enhance itself with high level of integration, its template is easy to change, and eventually solve complex artificial intelligence problems.)

The exciting trials will push the boundaries of innovation as HPT’s engineers and IT specialists focus on integrating the Q-Trucks with multiple planning, operating systems and safety at the terminal.

“The testing will be thorough, in terms of the operating features of the trucks and the technological aspect of how they integrate with the Group’s terminal operating system, nGen.

This includes our control tower, planning system, and traffic management system. Then, we will see how these Q-Trucks can be used in harmony with our conventional fleet,” said Ashworth.

The trials will continue for a period of up to 12 months. If the testing is successful, HPT may consider ordering more of the Q-Trucks for deployment at Terminal D to operate in parallel with the current conventional truck fleet.

“I cannot say for sure which of our other port operations around the world will take up these trucks, but I expect overall interest levels will be quite high,” he added.

“In Thailand, it has always been our intention to develop Terminal D into a ‘smart terminal’ since it is a greenfield site and has the ideal conditions for the introduction of next-generation technology.”

The ‘smart terminal’ incorporates remote-controlled quay and rubber-tyred gantry cranes, automated gate operations and possibly the autonomous Q-Trucks, they are all part of the technology roll out for Terminal D in Thailand, according to Ashworth.

FROM DREAM TO REALITY

HPT’s plan is to move the Q-Truck from a concept vehicle to a pragmatic workhorse to enhance and improve productivity at Terminal D and eventually other terminals within the Group’s network of ports.

“This technology is very new. Essentially, they are smart trucks with no drivers required. They operate with AI, sensors and GPS. There is a good chance that these trucks will be able to integrate with our systems and be incorporated into our operations. The idea is that these Q-Trucks will be moving containers from the yard and to the vessel, and then back again as if there are drivers operating them and receiving instructions,” said Ashworth.

Terminal D has long been known as a ‘laboratory’ within the Hutchison Ports Group, pioneering new technology, testing and bench marking new digital solutions and equipment to evaluate effectiveness and durability.

The special ‘smart’ and ‘green’ status of Terminal D was established from the early days of HPT, and the facility has the capacity to support new technologies to explore how they can advance optimisation for the Group’s port operations.

“We are a test phase terminal for a lot of the Group’s technology plans, if it works here, chances are it could be replicated to many of our other ports around the world too. We also have a very professional and engaging workforce. There are a lot of talented staff members here who are quite keen to take a step forward. They are progressive and not against innovation in any way,” Ashworth concluded.

Well beyond the early automated guided vehicles operating in Rotterdam, the Netherlands, since the 1990s, the Q-Truck operating system mimics the human brain and is able to process images, voices and texts via a smart operating system called Deep Learning.

Loaded with banks of sensors which gather images of the local geography the Q-Truck can navigate effectively through busy terminals.

“These Q-Trucks are able to recognise the environment through multi-sensors and collect geographic information to build a digital map required for autonomous navigation. This is convenient and suitable for autonomous driving in enclosed areas, such as ports and terminals,” explained Ashworth.

The trucks also have the advantage of 360-degree wide perspective through sensors and HD cameras providing real-time, all-round ‘vision’ enabling the vehicles to instantaneously ‘see’ everything in its vicinity. Another feature is the electronic signal control, which allows for very quick response times enables a safer and smoother manoeuvre by the vehicle.

The futuristic technology is being deployed through close collaboration between Westwell and Hutchison Ports’ engineers and IT personnel. So, what is the initial feedback on the Q-Truck testing and systems integration? asked OPPORTUNITY.

“Given the hands-on involvement of Westwell engineers and our own operations, engineering and IT colleagues, the learning curve has so far not been as steep or as daunting as initially envisaged. Yes, there will be challenges and I am sure that we will come across problems during the testing phase, especially with the interface with our nGen system, but I am confident that these can be overcome over time.” Ashworth concluded.

The data collected from all installed sensors is converted inside a direction control command centre. After a rigorous end-to-end learning module verification, the Q-Trucks will be able to learn a set of autonomous driving skills. This could be applied to several functions such as lane-keeping, overtaking, obstacle avoiding and intersection turning in structured/unstructured roads.

Furthermore, the 2D/3D switchable intelligent interface platforms developed by Qomolo allows users to schedule the Q-Trucks’ tasks, remotely monitor the vehicle and share data. For special operating conditions such as bad weather, the remote control system is able to switch to manual controlling mode with no more than 500ms delay. The trucks are also able to make an emergency stop when faced with unavoidable obstacles. 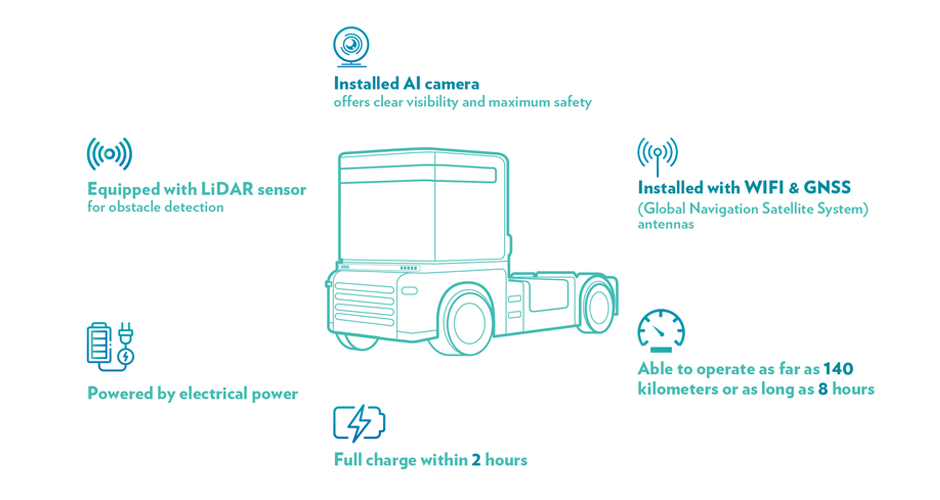 Despite the excitement of the arrival and testing of the Q-Trucks there is a sober message that this project is currently about evaluating the effectiveness, productivity and overall benefits of these highly advanced machines to HPT and Hutchison Ports Group. There will no doubt be tweaks and adjustments made before the Q-Trucks are approved and commissioned for use. However, it is still a good time to marvel at the possibilities that these ‘thinking’ trucks can deliver to the Group in the years to come.