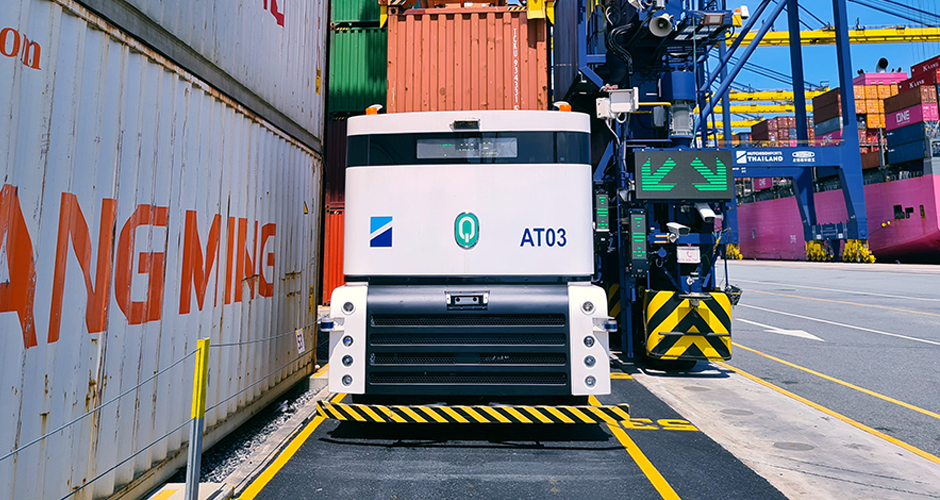 FROM SMART TO GENIUS

Hutchison Ports has always been a leader of innovative ideas that have revolutionised terminal operations, and through a number of bold investments the group has aimed to reduce its carbon footprint, improve sustainability and efficiency.

When autonomous vehicles first became popular with test runs widely seen on public roads a few years ago, the Group Operations, Engineering and IT development teams were inspired by the technology and the potential it to adapt into container terminal operations. After some initial assessments and satisfactory proof-of-concept trials, Hutchison Ports decided to partner with Westwell to develop autonomous truck technology to the groups’ network of ports in October 2019.

From its inception, Terminal D was designated to become a ‘Smart’ and ‘Green’ facility, which made the terminal the ideal location to kick off the journey of autonomous truck implementation. With the terminal’s state-of-the-art infrastructure and technological resources, it had the capacity to support new technologies and readily open its doors to more technological optimisation and upgrades. It is the most suitable terminal to pioneer new technology, pilot projects and benchmark new digital solutions and equipment, a de facto ‘laboratory’ for the group.

The autonomous truck is designed without a driver cab and built-in AI, advanced sensors, HD cameras and GPS to navigate around the terminal and perform specific tasks assigned by nGen (a proprietary Terminal Operating System by Hutchison Ports).

With numerous trial runs and safety test results verified by risk assessment experts, the autonomous truck operates like any ordinary conventional truck with a human driver, only safer and more efficient.

Hutchison Ports has successfully adapted the autonomous truck from a concept vehicle to a pragmatic workhorse that has enhanced and improved productivity and safety levels at Terminal D.

Another important aspect of success in this project, has been the overall acceptance of innovation within the Hutchison Ports Thailand workforce. Staff are keen to work with new technology and have embraced the introduction of remote-control equipment. With the autonomous trucks already in production, staff can now perform new tasks and assignments to further improve terminal efficiency and productivity. It is a testament to the professional, progressive, and engaging project team which turn the autonomous truck concept into a reality.

Hutchison Ports set the standard for automation with its ECT Delta terminal in Rotterdam, the world’s forerunner to Automated Guided Vehicles (AGV) in the 1990s. Through continuous investment, and especially the combination of advanced knowledge and technology, ECT Delta is still leading the way today in Europe.

Since then, the group has been rolling out many inventive terminal developments and projects throughout its network of ports. These cutting-edge developments have resulted in improved cost efficiency, increased productivity and reduced downtime. The benefits range from lower ‘long-term’ operating costs, energy efficiency, greener credentials and better staff welfare.

The autonomous truck incorporates a neuromorphic chip that can teach, train and enhance the vehicle with a high level of integration and self-learning. The vehicle can then solve complex problems with its AI and respond and act independently to complete an action or task. Loaded with banks of advanced sensors and HD cameras, the vehicle gathers images of the local geography so it can navigate safely, effectively and freely through busy terminals without physical segregation from other manned trucks.

The AGV is a driverless vehicle that tracks along the transponders below the terminal ground for navigation and use lasers for safety. The AGV operates in dedicated routes which limits its flexibility compared to AI enabled autonomous truck. The AGV operates in a dedicated area fully separated from other manned vehicles.