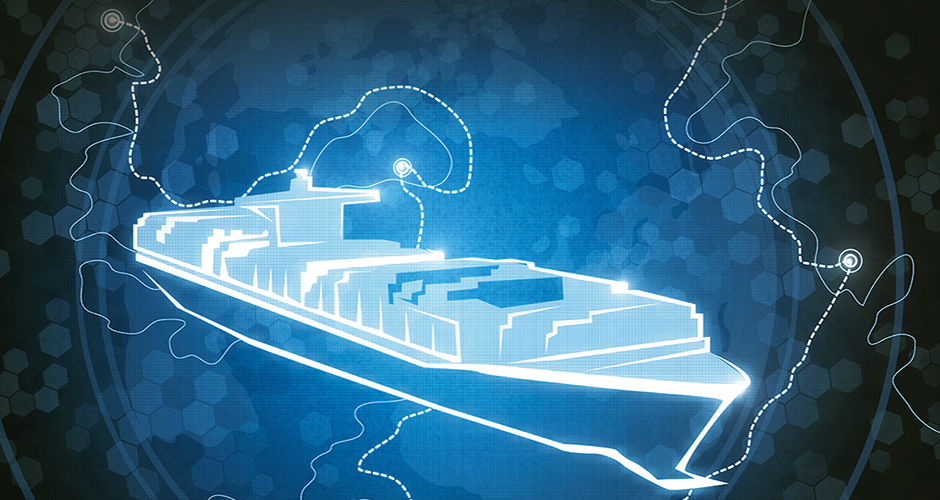 With the recent announcement of Japan’s intention to commercialise unmanned vessels by 2025, it appears that the technological development of ships is gathering pace. But questions are being raised by leading thinkers in the maritime sector about the direction the maritime sector is headed.

Japan’s stated aim of being a leader in this field is driven by a variety of factors, according to sources quoted in Lloyds List. Investment in this technology is partly stimulated by concern of a future shortage of seafarers and increased competitive pressures from South Korea and across the globe. The Japanese government is positively backing applications for technology research by offering subsidies.

Indeed, the Internet of Things (IoT), virtual forwarders and e-navigation are just some of the developments that are changing the face of the maritime industry. In an industry often characterised by old-fashioned practices, yet increasingly complex and under constant pressure to maintain efficiency, technology can appear to be a ‘silver bullet’.

Michele Acciaro, Associate Professor of Maritime Logistics at Kühne Logistics University, has reservations about the way developments could progress.

“After almost a decade of record low freight rates, ship owners and operators are in dire need to find innovative ways to improve efficiency and service. But are autonomous ships really the way to reap the benefits of digitalisation?”, he asked.

Acciaro points out that while technological advancement in shipping is likely to be a positive development, the sector needs to consider how far technologies should go and what issues should be prioritised.

He added, “Only a vision aimed at making digitalisation subservient to quality shipping can turn smart ships into the real disruptor towards a sustainable future maritime transport sector.”

Digitalisation is changing the shipping sector and some commentators suggest its impact could be greater than the introduction of the maritime container, more than 50 years ago. Improving communication and data exchange have been a long-standing priority for the industry. Examples of this include initiatives like the EU funded seventh framework project eMar and the IMO led e-navigation strategy.

The simplification of the exchange of (electronic) documents, as well as data as part of the increasingly complex safety and security requirements imposed on shipping, is long overdue, Acciaro claimed.

“The progressive reduction of the number of crew on board ships calls certainly for increasingly automated and simplified processes. And the ability of ships to exchange operational data in real-time could also improve ship management,” said Acciaro.

“The opportunities offered by direct real-time remote access to ship technical data has opened the door to providing direct assistance to the crew, allowing them to take full advantage of instantaneous optimisation of ship operations in the future,” he said.

Acciaro also explained the increasing importance of sensors, “Virtually all aspects of navigation, from cargo loading and unloading, as well as engine performance, equipment and hull integrity, can today increasingly be observed remotely through sensors.”

Acciaro pointed out a critical feature of remote monitoring. “This feature holds the possibility of assisting the marine master (aka the Captain) in making critical decisions on the vessel and can provide valuable information to shipowners and onshore managers for better planning of maintenance.”

Weather routing – the ability to steer the course of navigation in real-time away from unfavourable weather conditions – is also an area where substantial advances have been made. Commercial software is already available, and substantial improvements are now possible for safety and cost reduction. Acceptance on deck, however, remains a challenge. This is because often the marine master or crew are sceptical about the accuracy of the systems and their reliability in real-life situations can be difficult to assess, Acciaro warned.

“While remotely-controlled ships, that are piloted by people onshore, will not be a reality for a while, there will certainly be an increase in the role of people onshore in vessel operations.”

Martin Rowe, Managing Director of Clarksons Platou Asia Hong Kong, concurs with many of these misgivings.

He explained, “Whether self-controlled/autonomous deep-sea cargo vessels are even possible yet is unknown. Whether they are desirable is another matter.”

“For ships the adage that ‘worse things happen at sea’ means that emergency scenarios will arise from time to time that have never been encountered previously. And these are probably better handled by sentient beings on board than trusted to solid-state electronics to solve, even if assisted by people in a control room somewhere on the other side of the world,” said Rowe.

He drew comparisons with passenger aircraft, claiming that there is very little public appetite to be a passenger aboard a self-piloted aircraft.

The maritime environment is a harsh and unforgiving one, explained Rowe. When cables and stays on deck snap or come loose on a 20,000 TEU container in a force 12 storm in the middle of the Atlantic, or something catches fire, having someone around to sort things out before the situation becomes critical is a good idea, he added.

Rowe said, “As my colleague, Professor Martin Stopford recently pointed out at an industry conference, with smart shipping (onboard sensors and satellites) the vessel goes from being a separate ‘profit chimney’ to an integrated part of a larger profit team tied into the whole fleet, constantly adjusting to gain maximum efficiency aided by teams of experts onshore and onboard vessel crews with 24-hour communications.”

According to Acciaro, one of the most promising technological developments associated with condition monitoring is the possibility of interconnecting operating systems directly without the intervention of humans.

The onset of technological progress (e.g. electronic sensors) coupled with growing data exchange capabilities through satellite and computing power have profound implications. For instance, the result has been the development of a wide range of autonomous vehicles, such as cars and planes. So – asks Acciaro – why not fully autonomous ships, able to navigate themselves across the oceans?

“While it is likely that in the beginning these autonomous systems will be used to assist the marine master and crew, we can imagine that operations on board will be increasingly automated in the future.”

“Full automation is likely to take a while, despite the recent optimism and publicity that has followed the planned launch of some pilot projects such as the Mayflower Autonomous Ship (MAS 400). Rolls-Royce predicted fully robotic ships to become reality by 2020,” he added.

The fully-digital autonomous ship has been hailed as the new frontier in shipping by some commentators. The most commonly reported advantages of these vessels, according to Acciaro, include:

• Increased safety by means of eliminating human errors.
• Larger cargo capacity.
• Lower operating costs.
• The possibility to overcome skilled labour shortages.
• And eliminating the threat of piracy, as an unmanned ship would not be a profitable target.

Despite some compelling arguments for autonomous ships, Acciaro said he had some reservations. He said, “Labour cost reductions have also been mentioned, but
any cost decrease claims, however, are questionable in view of the high cost of automation and, arguably, the need for onshore staff to keep the oversight of the autonomous ploughing of the oceans.”

While some of benefits might materialise, it is likely that their importance is overestimated, Acciaro claimed, especially in a situation where autonomous ships only exist on the drawing board.

Progress and technological innovation can take unpredictable pathways. However, the development of advanced technology could have positive benefits for companies who take up first-mover advantage, said Acciaro, as well as other economic spin-off benefits.

Echoing sentiments expressed by Rowe, Acciaro then warned, “The shipping sector and society, however, should also reflect on the desirability of the pursuit of such hyper-technological developments.”

He clarified his thoughts, adding, “The technological and legal complexity associated with the deployment of robotic ships is substantial. And the risks associated with automation in highly unpredictable environments are enormous, especially in view of the value of the onboard cargo and the catastrophic consequences of serious ship accidents.”

According to Rowe, autonomous shipping is currently not possible due to minimum safe manning rules and the inability of a vessel to berth itself. Also, there are rules in place at sea about deviating to assist/rescue other vessels, or people in distress.

“The whole rule book would need to be totally rewritten to allow autonomous ships and would require the collaboration and consent of the insurance industry,” he added.

The International Maritime Organisation (IMO), based in London, is the body tasked with coordinating uniform regulatory standards in the shipping sector. Torgeir Willumsen, Resident Partner, Simonsen Vogt Wiig, in a commentary published in Seatrade Maritime News, outlined some of the legal challenges presented by autonomous ships.

For instance, safety standards and conventions stipulate that “vessels shall be properly manned”, which is problematic under autonomous shipping where no crew are on board. Another area of uncertainty involves ‘rules of navigation’, which at present relate to the crew. Again, where there is no marine master this leaves an element of doubt in the present arrangements. Willumsen suggests that amendments
will be required to place the duty on a different entity (other than the marine master of a vessel) possibly to someone else ashore. He also highlights possible complications involving collision avoidance regulations, which again involve a human element. Nevertheless, he believes that there is “conceptually nothing preventing an unmanned vessel from complying with such requirements”.

Willumsen also pointed out issues pertaining to liability regimes based on crew negligence. Due to the legal complexities involved with unmanned ships, he believes autonomous vessels will be deployed on a national or local level first, within coastal or inland waters, as national legislators operate on a faster timescale.

On the other hand, Rowe said, smart shipping allows many of the changes that are being mooted and within existing legal/rules framework.

“There are some potential issues of ‘deskilling’ or ‘reskilling’ certain personnel on board to allow them to perform the systems monitoring role and to work as part of the team in the new smart shipping environment. But those are changes which should be achievable with relatively modest changes to the rule book.”

Acciaro said, “Better working conditions on board vessels and making the maritime profession more attractive by means of better salaries could, for example, reduce the scarcity of skilled labour. Also, improving training, increasing crew numbers and the uptake of new technologies could reduce the incidence of human error, by limiting fatigue and stress.”

Peter Hinchliffe, Secretary-General of The International Chamber of Shipping addressed at a recent conference on the development of autonomous ships, as reported in Lloyd’s List. He said members of his organisation were not overly engaged in discussions on this issue, and that technological improvements should be harnessed to consider a future where many ships are still manned, to improve safety.

Dr Kirsi Tikka, Executive Vice-President of ABS Global Marine, said current vessels can benefit from improvements in technology and could be retrofitted.

She assured shipowners that new technology being developed for autonomous ships could, in future, be implemented to new tonnage of 2020, and therefore this tonnage would not become obsolete by 2030. For Dr Tikka it is a question of balancing operational needs of today with future technological developments. She said the skills of master mariners and engineers will still be in demand in the future.

More generally, advances in shipping technology and reduced costs through containerisation have brought huge benefits to the shipping sector and international trade.

But Acciaro warned, “This cost reduction has not necessarily been associated with sufficient improvements in labour conditions. More than the pursuit of technology, those technological developments that can favour a rapid uptake to quality shipping seem still urgent and needed.”

“Many environmental issues associated with shipping, such as greenhouse gas emissions or ballast water, have yet to be resolved. It is time to start considering what technological priorities should drive the future developments of the sector,” he urged.

According to Rowe, smart shipping is likely to become a reality in the near to medium term. But for autonomous ships he forecasts that the developmental timescale will be “way off in the future”, if indeed they ever come about.