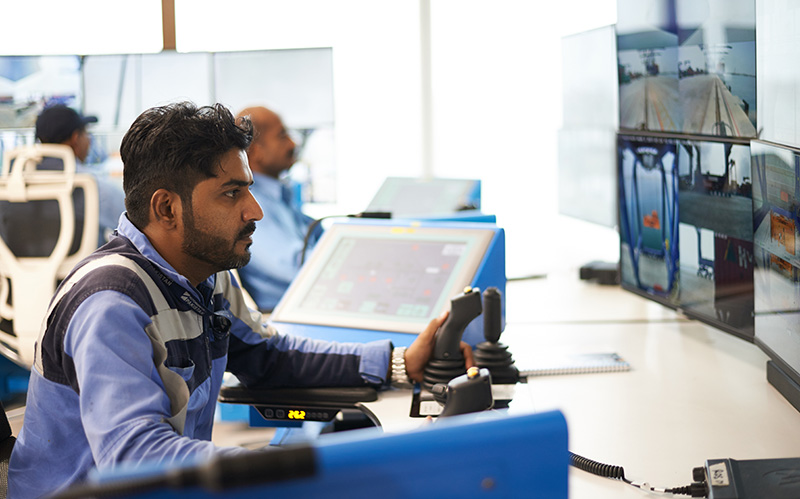 IMPLEMENTATION OF REMOTE-CONTROL OPERATIONS IN FULL SWING AT HUTCHISON PORTS

As the giant container vessels of 18,000- 20,000+ TEU capacity are calling at the world’s major ports, terminal operators are gearing up to accommodate these ‘Goliaths’ of the sea.

The increased size of these vessels has led to many challenges at ports, including unloading a large quantity of boxes from ship-to-shore and from shore-to- container yard over a very short timescale, while improving productivity and maintaining a primary focus on safety and health.

The velocity of the crane moves and the height of the new and retrofitted quay cranes mean that technology is playing an increasingly important role on the waterfront. It provides an essential aid to moving containers more efficiently and safely around the terminal.

“As early as 2013 we decided to deploy remote control semi-automated gantry quay cranes to operate in Saudi Arabia. There were several reasons we selected this port; one of the main reasons was that our crane operators had to work in extremely hot weather, frequently over forty degrees centigrade. By moving the operators indoors, they were in a safer, air-conditioned environment and very quickly we saw productivity improve,” said Eddie Lee, Group Engineering Director at Hutchison Ports.

The catalyst behind the initiation is a unique and pioneering partnership between Hutchison Ports and global crane manufacturer Shanghai Zhenhua Heavy Industry Co., Ltd. (ZPMC). In the summer of 2013, ZPMC was contracted to build three conventional gantry quay cranes for Hutchison Ports Dammam at Saudi Arabia.

“We approached ZPMC to upgrade these three conventional gantry quay cranes into remote control and semi-automation. They first hesitated but since we had developed a good relationship with them over the years they were willing to assign a team to work purposely for this project,” said Eddie Lee.

“We invited them to understand every aspect of our terminal operations and processes so that they could take this information and knowledge and then implement into the core design process, which includes risk assessment to quay cranes and the yard gantry cranes,” said Lee.

Ms. Yang Yuqing, Electrical Group Executive General Manager at ZPMC, said, “When Hutchison Ports approached us to collaborate on the project we had no container yard operations experience at all. However, we embraced the opportunity to have a more in-depth understanding of our customers’ business and began the project.”

“We worked closely with Hutchison Ports. It was a true collaboration between their operations development team and our engineers. After in-depth analysis of our client’s terminal operation mode we were able to move forward to design and build cranes to their exact specifications and requests. Given that remote control and automation at the time was relatively new to the container terminal industry we proposed to Mr. Lee to incorporate those functions into only one quay crane first as a trial,” added Ms. Yang.

However, Hutchison Ports had full confidence in ZPMC’s team and requested them to build the remote control/automation features in all three units instead of one.

“We trusted ZPMC and they took the time to understand what we wanted and how we operate. In the end they successfully designed, built, delivered and installed three remote control semi-automated quay cranes in Dammam, Saudi Arabia by early 2015,” said Lee.

On conventional quay cranes the crane operator sits in a cabin typically forty to fifty metres above the deck of the ship. His visibility is limited especially in poor weather when the container is inside the hull. With the latest camera technology available, it means that the remote-control operators can now zoom in on the spreader and container from a desktop monitor, which enables more efficient moves with precision accuracy.

Furthermore, those semi-automated functions such as anti-skew/anti-sway and profile scanning gave the crane operator at the remote-control desk a better control of the container movement.

“Initially we saw comparable productivity and performance between manually operated cranes and remote-control cranes. As the remote-control operators become more proficient and got used to the new system, productivity increased and performance improved. After the successful delivery, trials, and operations of the remote-control quay cranes at Dammam, Hutchison Ports now has a total of eighteen semi-automated units in use at its ports with five units in Saudi Arabia, four units in Oman, eight units in Pakistan and one in Rotterdam,” said Lee.

By the end of 2018 Hutchison Ports plans to add another eighteen remote-control cranes at its terminals around the world. 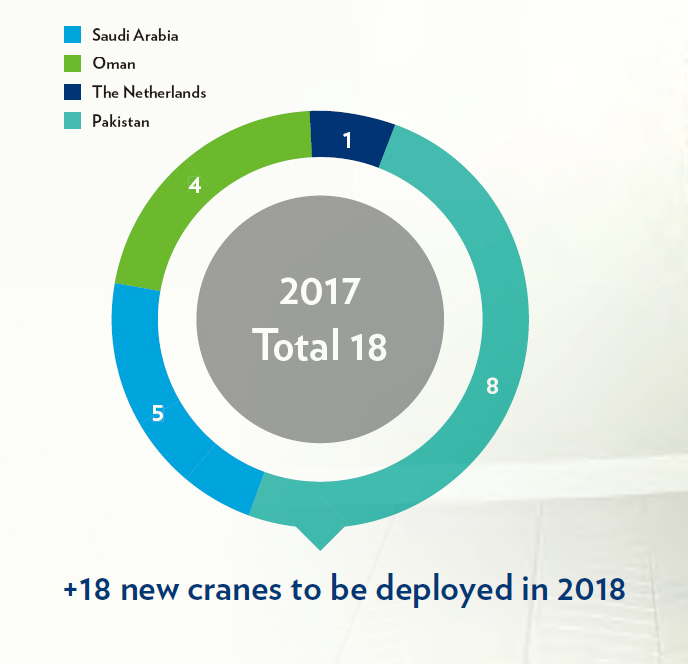 Despite increased deployment of technology on the waterfront, the human element is still critical in today’s modern container terminal. Hutchison Ports has introduced remote-control quay cranes at facilities around the world, which leads to a better indoor working environment and improves the safety and health of the operator while harnessing the support of technology.

“Many of our crane operators have been retrained to work in a remote office location at the terminal where they operate the semi-automated cranes from a desktop. The chair and desk are ergonomically designed and the office is air conditioned providing a safer and healthier environment for our operators,” said Eddie Lee.

“We need the operators particularly for the onboard locking and unlocking of containers as the system cannot yet adapt quickly enough to the movement of the ship at quayside. There are small margins involved as the angle of the ship changes depending on the swell of the sea, strength and direction of the wind. The operators have the experience and the skills to manoeuvre the spreader for the last few centimetres and lock onto the corner castings,” he added.

Operators working on traditional manually operated cranes, are required to travel across the container yard to and from his or her crane to the operating cabin and this takes time. The operators also need to leave the cabin for meals and body breaks. The office-based environment means there is less travel time to and from the crane operator’s work space which increases productivity and efficiency.

The majority of crane operators in most countries are men, but as the port industry migrates to remote-control operations there will be more opportunities for staff who may find the new working environment appealing.

By providing an office-based environment for remote-control crane operators it enhances equal opportunity of employment, such as female operators and handicapped workers. It might also attract a new pool of workers through introduction of flexible working hours.

“Ultimately we see this as a positive development for our crane operators and the industry as we are enhancing the working environment and will enjoy higher productivity rates,” said Lee.

While the focus has been on the development of quay crane technology, there has also been a parallel programme being developed for Rubber-Tyred Gantry Cranes (RTGCs) so that they can also be controlled remotely. The major challenge is the variable tyre pressure on position determination and the transmission of signal and data to the remote-control desk.

These units were completed through close collaboration between Hutchison Ports and ZPMC. Both companies worked on the design and development which resulted in a very successful and positive outcome for both parties. At the moment, the design development of these machines are undergoing pre-shipment testing and commissioning at ZPMC. When they are installed at Hutchison Ports Thailand they can move containers from truck to stack remotely and carry out housekeeping reshuffling automatically.

“It is important to note that most port operators are introducing remote control and automated crane technology to their terminals. We are moving towards that direction in order to maintain our competitive advantage but only those terminals who can demonstrate a sound financial return from this technology will be included in our automation programme,” concluded Lee.