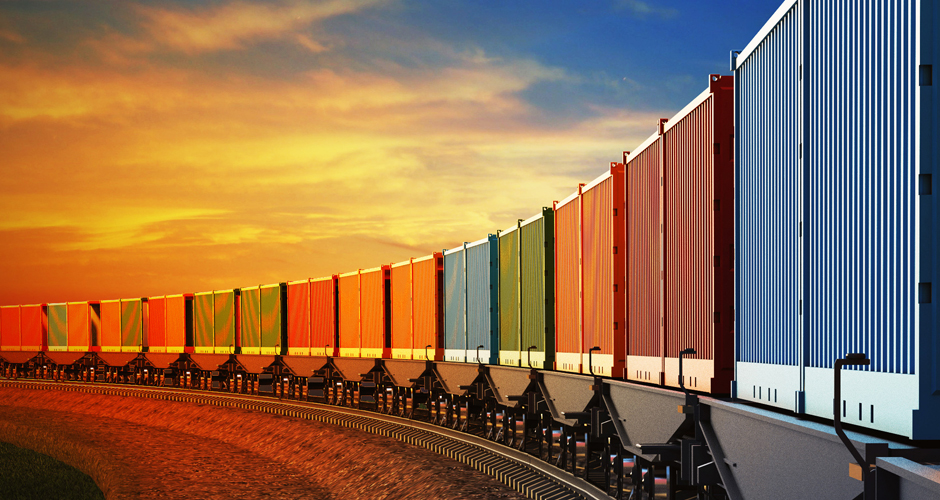 The fortunes of railways have been up and down pretty much since the advent of the combustion engine, leading to fierce competition from faster and more flexible road transport and marine transport no longer reliant on the wind.

But that’s changing in a big way. Rail is making a comeback, thanks in great part to China and its ambitions for a new Silk Road between Eastern Mainland China and Western Europe.

What is the Belt and Road Initiative (BRI)? In “The new Silk Route – opportunities and challenges for EU transport” a report commissioned by the European Parliament’s Committee on Transport and Tourism (TRAN), the authors note that “No official or generally accepted definition of the BRI exists.”

It would be difficult to define in detail since much of its creation depends – and will continue to depend – on other governments and other countries’ private sectors.

But the vagueness of the definition is one of its attractions, especially since, the report notes, “Its scope includes 65 countries which jointly account for some 60 percent of global GDP and 30 percent of the world’s population.”

“It has no clear geographical or economic boundaries – the BRI appears to have evolved in response to individual countries’ engagement with China, rather than in line with an overarching strategy.”

The “belt”, or overland, part of the BRI that is attracting the most attention is the 12,000 kilometre railway system that runs from China’s Jiangsu province, through Kazakhstan, Russia, Belarus and Poland, and thence to multiple destinations in Europe. Three spurs run south off it, into Southeast Asia, Pakistan and Turkey.

The report, published in January this year, assessed the extent to which cargo currently carried by ships and aircraft between Europe and the Far East will in future shift to rail because of the BRI.

By 2040, it concluded, “The results of the analysis indicate that around 2.5 million TEUs [per annum] could transfer to rail from maritime transport, and 0.5 million TEUs from air transport.”

That is a significant shift. Up to August last year, Container Trades Statistics counted 9.3 million TEU on Asia-Europe routes. Extrapolated to the end of the year that would be about 14 million TEU in 2017. If the EU report is correct, shipping could lose 18 percent of that to rail.

The reason is simple. By sea it takes forty days to travel from one end to the other, while trains have already shown they can do the journey in eighteen to twenty days. 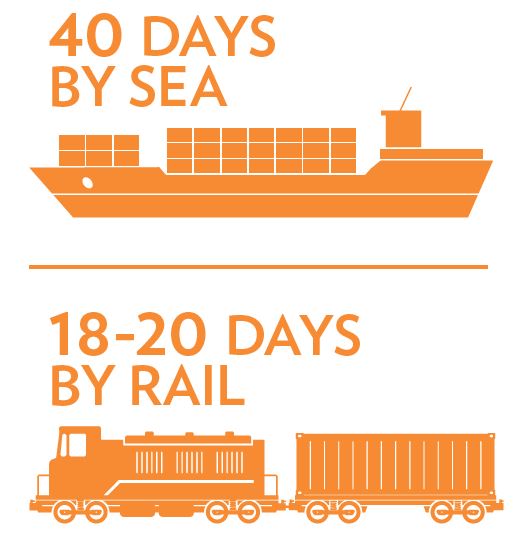 One of the most spectacular is at Khorgos-East Gate, on the border between China and Kazakhstan. At this border, there is a break-gauge, where containers have to be transferred from a Chinese train to one that will run on the old Soviet gauge, or vice-versa.

Khorgos now has a container yard that can handle 18,000 boxes a day. There are plans to double that capacity within a year.

For the past three years China and Kazakhstan have been operating and expanding this desert site into a huge dry port with manufacturing areas/special economic zone that will eventually be the largest in the world, leading to it being widely described as the ‘New Dubai’.

Where trains reach the Belarus-Poland border, there is another break-gauge at the town of Malaszewicze. Ten years ago, one train from China would pass through the town every month. Now it’s as many as two hundred.

So Malaszewicze is currently a bottleneck and it’s clear that China is looking for investments that could turn the town into ‘Khorgos-West Gate’.

In October last year another three countries opened a new 835 kilometres rail line linking to the BRI. It begins in Baku, Azerbaijan, and runs through Tbilisi in Georgia to Kars in Turkey.

After banging in official rail spikes, Turkey President, Recep Tayyip Erdoğan said the railway could carry 6.5 million tonnes of freight a year, rising to 17 million tonnes by 2034. Chinese goods can reach Turkey within fifteen days, he said, compared with thirty days by ship.

And all of this is just the beginning.

For more than a century, rail has been well established in Europe providing the backbone for both passenger and freight transportation across the continent. But there is now renewed investment from governments and industry to further develop connections to the hinterland and linking inland areas with ports.

“Rail is a key part of our overall strategy for all our European business units. Each deep-sea terminal in our business unit in Rotterdam, Amsterdam, Gdynia, Felixstowe, London Thamesport, Harwich and Barcelona all have on dock rail facilities,” said Cheng.

The scale of Hutchison Ports rail infrastructure is significant, reflecting its growing importance in developing new markets and revenue streams.

“In fact, Felixstowe has three rail terminals with an aggregate of twenty tracks – more tracks than King’s Cross railway station in the United Kingdom! The new Norvik terminal we are building with Stockholm Port Authority will also have a substantial rail facility. We are handling close to 30 percent of our volume in Felixstowe by rail, 12 percent in Rotterdam, 21 percent in Gdynia and 18 percent in Barcelona. In 2017, Felixstowe became the first UK deep sea port to handle over 1 million TEU by rail. Rail is certainly creating new revenue opportunities and broadening our customer base.”

IN FOR THE LONG HAUL

A large proportion of the cargo moving through our European ports is destined for, or originated from the inland distribution centres and industrial heartlands (e.g. from Rotterdam to Venlo, Felixstowe to Birmingham, Gdynia to Warsaw or Barcelona to Zaragoza). Rail is extremely effective at providing a low-cost and environmental-friendly solution over the longer distances to and from these regions.

“It is important that our shipping line customers and other port users have a choice of modes of transport from our ports. The rail options we offer, with sixty-six freight train movements per day in Felixstowe, is an important factor in attracting cargo to the port. Hutchison Logistics, Europe Gateway Services and SYNERGY all offer rail freight services to help access markets well beyond the port gates and beyond the traditional regional hinterland,” said Cheng.

As the rail renaissance continues Hutchison Ports is looking to further consolidate its leading position by further investment according to Cheng.

“There will be ongoing capacity works to the rail infrastructure connecting Felixstowe to the national network in the UK and further investment in strategic inland rail terminals on continental Europe will provide further opportunity to significantly increase our rail offerings. We are working with authorities in different countries to ensure that rail freight is supported by appropriate national policies and investment,” Cheng added.

Consumer demand for perishable goods continues to grow and Europe is both a significant exporter and consumer of fresh foods such as seafood and premium meat products. Other industries such as pharmaceuticals and cut flowers are also switching to rail as an alternative to air freight.

“The ability of rail to accommodate perishable cargoes is currently limited due to the lack of an integral power source on rail wagons. This unrealised potential could represent a considerable growth opportunity for the rail freight operators in the medium to long term,” said Cheng.

“However, in Spain there are already rail services for reefer containers in the Murcia-Bilbao and Barcelona – Zaragoza corridors. SYNERGY is investigating the possibility of launching an intermodal reefer service to attract cargo from Northern Spain,” he added.

GREEN LIGHT FOR THE ENVIRONMENT

Hutchison Ports developed its strategic inland rail facility Hutchison Ports TILH (Terminal Intermodal Logistica de Hidalgo) to meet demands from the intermodal sector at the most dynamic economic zone of the country, also known as the ‘Valley of Mexico’.

The region has a population of over 24 million habitants, generating 25 percent of the country’s GDP, hence the relevance of this market.

Hutchison Ports TILH was strategically planned and developed to provide a competitive edge over other terminals and shipping lines as they consolidated and created vertical integration practices and also invest in their own terminal rail freight operations. TILH enabled an extension beyond the port by implementing integrated logistics services to outreach customers within their natural hinterland.

The development of TILH Phase 1 is underway with an intermodal yard which will add four 600 metres of track with a capacity to handle up to 180,000 TEU annually. Currently, there are two daily services, VEREX and LAZEX which connects to the Mexico City’s region with Veracruz and Lazaro Cardenas.

“There are also plans for two additional services to connect TILH with the port of Manzanillo on the Pacific Coast and also the Southeast region of the United States. The former we call it MANEX service while the latter is called Cross-Border service,” said Yáñez.

“Our goal is to expand our service to up to eight tracks with a total rail length of 1,500 metres each to accommodate unitary trains with a volume up to 600 TEUs, similar to those running in North America,” added Yáñez.

“Pingyan Railway, a dedicated rail facility which supports railway transportation services to Hutchison Ports Yantian, continues to expand its network across South China, especially across the Pan Pearl River Delta area to ensure our customers with factories in the hinterland have easy access to the terminal,” said Leung.

“So far we have already launched sixteen services and handled an annual throughput of 160,000 TEU. The terminal served premium end users mainly from the toy industry and high-end electronics manufacturers. With rail network developing further, we are able to create more value-added services and provide tailormade solutions to our shippers and customers,” she added.

To further enhance the terminal’s rail services there are plans to extend container terminals functions and services to selected inland cities, such as developing inland ports to ensure a seamless connection within the terminal.

“We have plans to establish inland ports in Changping, Heyuan, Ganzhou, Heshan, and will seek more possibilities to outreach to other areas,” said Leung.

The Shenzhen Blue Sky initiative is promoting the development of sea-water intermodal services in order to reduce the number of truck movements and lower emissions across the region.

“Fuel consumption and carbon dioxide emission from rail is only about 1/10th of road transportation and is considered environmentally friendly. The Shenzhen Municipal and District Governments are also launching new polices to subsidise the development of inland ports and intermodal projects to support the Shenzhen Blue Sky initiative,” said Leung.

Governments in Xiamen, Ganzhou, Chengdu and Tianjin all have plans to launch similar rail projects which is a preferred transportational mode for local major manufacturers and enterprises, such as Huawei, FOXCONN and Hewlett-Packard, according to Leung.